Since its creation, Ubios has counted on the support of several people and setting up an advisory committee is the next step on our way to growth. This committee will be composed of leading figures in the various industries that directly concern us. That’s why we are proud to announce the first committee member in the person of Yanick Proulx.  Employee of Vidéotron for more than 10 years, he is currently in charge of special projects in their Service Affaires division. Yanick has been recognized as a unifying leader everywhere he has been involved. 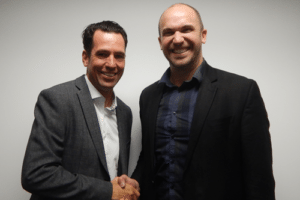 He will bring an informed view of the needs of our startup to the Ubios advisory committee, but above all he has the expertise to guide us towards our goals. Whether it is for the development of the service offering and the partnerships necessary to achieve success, production or marketing, we know Yanick will be a good advisor.
Proulx’s career path has been marked by success.  Over the past decade, Yanick has contributed to the successful launch of Videotron’s LTE network by negotiating roaming agreements with all their partners.  He also actively participated in the commercialization of the company’s new mobile services. His understanding of the global mobile market will be very useful to us and his presence on the Ubios advisory committee will allow us to count on his leadership and extensive experience.

“ Quebecor Media and Vidéotron encourage creativity, enabling initiatives and intrapreneurship. Ubios brings together very promising elements combining innovation and development capacity for this emerging Québec company with strong potential. I am confident that their innovative services will be a great commercial success.”

“Quebecor and Vidéotron’s investment in Ubios goes beyond just financial impact, it’s also a human investment. The presence of a person like Yanick in our inner circle will allow us to benefit from an incomparable assistance supported by a very real expertise. This will give us a strong competitive advantage, both in Quebec and elsewhere in the world. The whole team is enthusiastic! “

Attracted by new initiatives, Yanick also contributed to the modernization of Vidéotron’s IT infrastructure for B2B operations. He also worked as production manager at Olymel, contributing directly to the development of this jewel in Quebec Inc. He will find Ubios a fertile breeding ground in which his taste for novelty and his experience will be exploited.

“Because their passion and determination reaches out to me. The enthusiasm of Mathieu and his team to find new ways to adapt their solution to the market stimulates me particularly! ”

On January 24th, I Invest for the future!  As announced during the final presentation of…